"David Heintzelman is a smart, quick, witty and very talented copywriter. Probably the top copywriter in Las Vegas. But he should take better pictures if he's going to use them on his site." - Mom 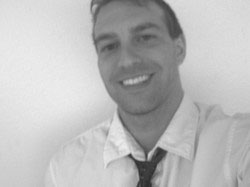 ABOUT ME
The first time I was told I should write for a living I was going to a Catholic grade school in IL and I had turned in a limerick that made the priest laugh. I took that piece of advice pretty seriously, until I realized writing was a ton of work. My junior year at Gonzaga University I learned about this thing called copywriter. Which is way less work than novels. Been pretty much up to that ever since.

MORE STUFF
I graduated from a small high school in Washington with, at the time, the highest SAT scores of anyone who had ever gone to the place. That's super impressive unless you know where Ilwaco is. During my junior year at Gonzaga I transferred to UNLV (it seemed a better place for advertising than Spokane). I graduated in 2003 with an A average and a Bachelor's of Communications, emphasis on Advertising and Minor in Anthropology. I started freelancing immediately and never really stopped, but as for official jobs with fancy W2's and even insurance in some cases: Marking Writer for a software company called Tririga, copywriter for DRSS, sole marketer/copywriter/ad guy for 411 Locals online SEO & web design company, and currently Supervising Copywriter for MGM Resorts. Each year around springtime I receive anywhere from a few to a dozen awards for the stuff I've done, it's sprinkled all over my site (though I'm terrible at keeping track). The most recent bigger one being a Shorty Award, and that's under the video section. All that's cool, but here's the most important thing; I have a passion for making cool ads. It's ridiculous. I know. But it's a lot of fun to me, and it just so happens, luckily, cool ads are the ones that actually work. (That last part is a secret though. Don't let it get out or half the industry will lose their minds).
Creative Las Vegas copywriter for video, radio, online, email and more. I come up with the ideas that win your business a lot of new customers. Contact me for freelance copywriter rates.