How I got my first job.
And other random things you should know about advertising,
​Before letting your child make the same mistakes I've made.

As you may have seen on your journey finding this website, I'm the first real human search result when you Google copywriter locally.

Probably because of that, mostly students but sometimes random people who are like "This commercial sucks I can do better," contact me and ask how they too can get into this glamorous industry where the talented creative people get smaller paychecks and worse desks than the people making the schedules and writing ops bulletins. 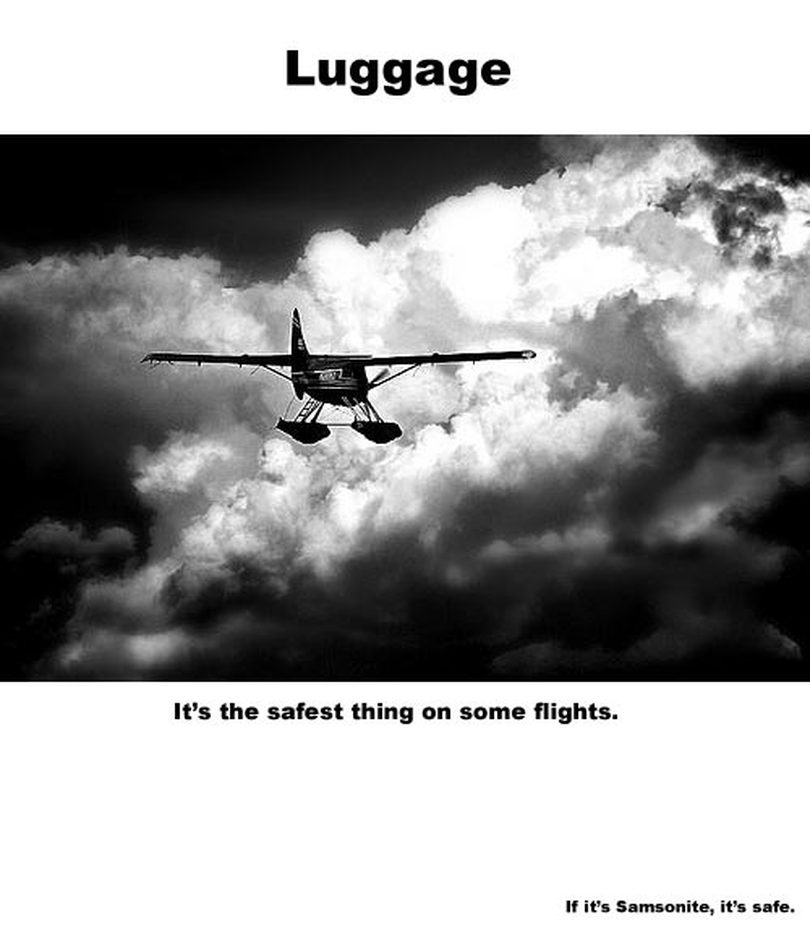 Well, your best bet is a fancy expensive ad school. I instead went to a fancy and expensive private school then transferred to a cheap not fancy state school when I realized I was out of money and just wanted to make ads anyway (I was a pretty clueless kid.) And it's all downhill from there. 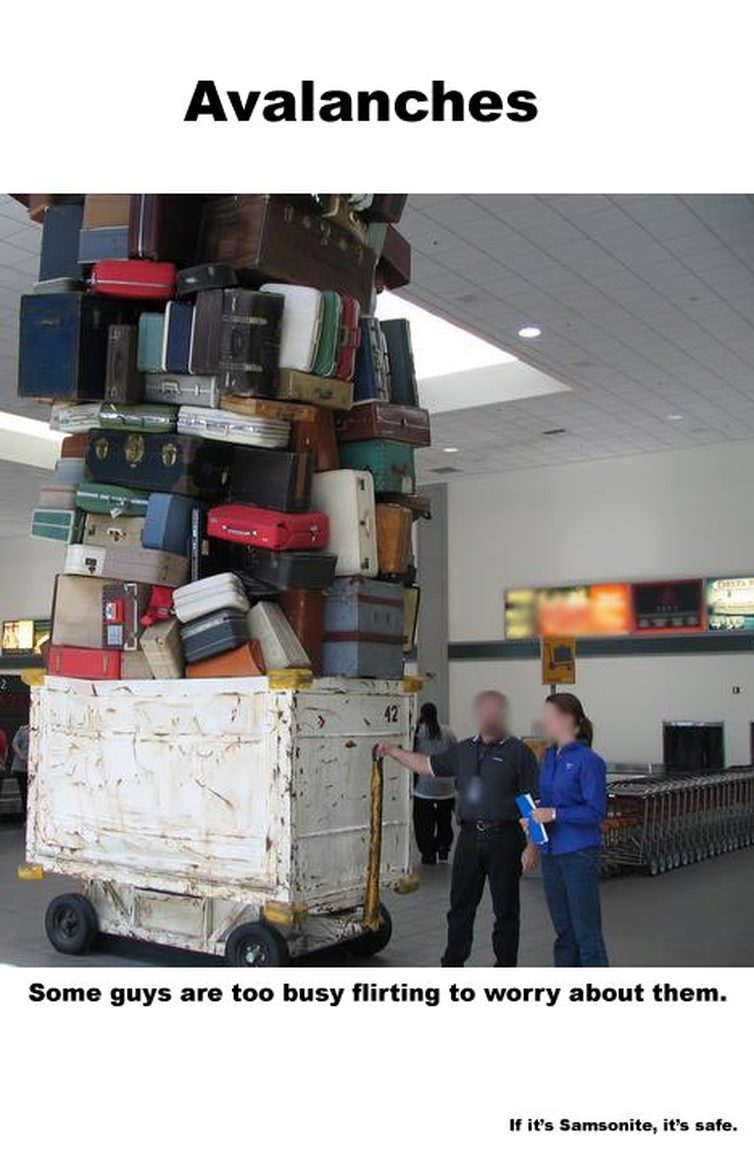 Notice the brilliant use of photoshop. I had zero designer friends in school. But I am proud to say that I seemed to have invented memes. They didn't exist at the time of this portfolio. 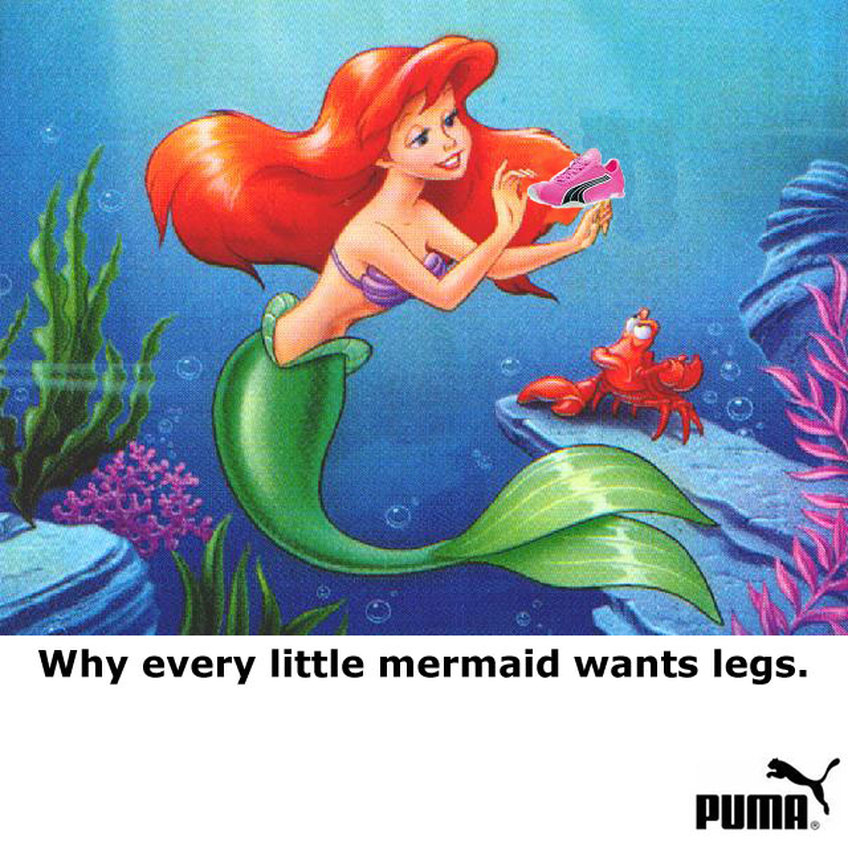 So, despite my own personal embarrassment, here is a little bit of what has survived from my first portfolio. These are called spec ads. You basically make stuff up for imaginary clients then beg someone somewhere to give you a job so you can make stuff up for real clients... there's actually not much of a difference. Anyway. 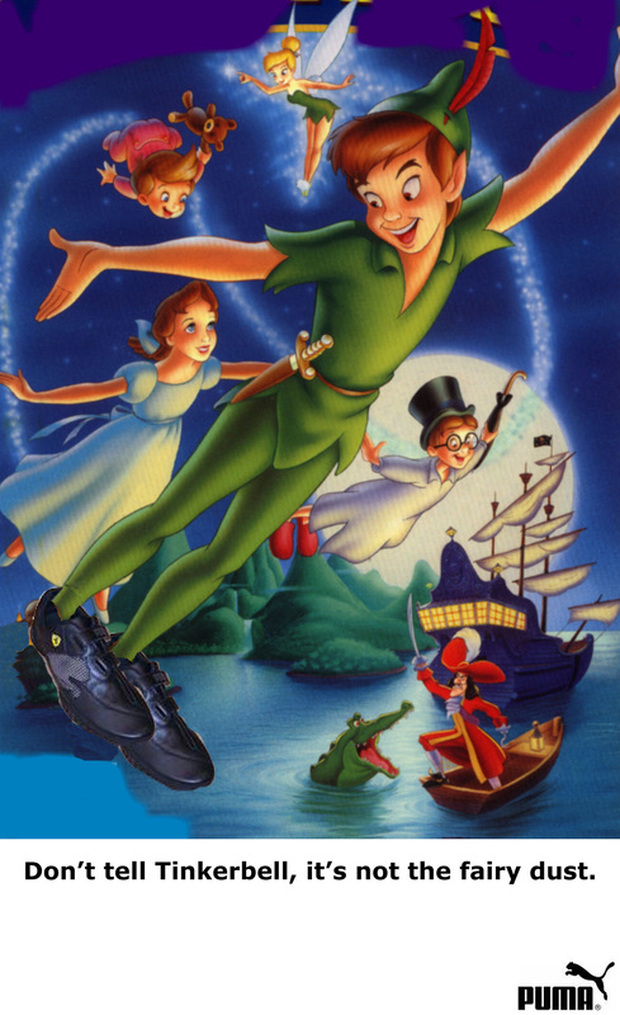 ​Imagine driving around Vegas during the summers in an old beat-up 1985 Mustang with no air conditioning and bad breaks, lugging around your grandpa's suitcase full of ridiculous ideas like this, dripping sweat, smiling like an idiot, walking into serious agencies, serious businesses, and asking for a job convinced this one, this time, would give you something so you could eat.

Really, just imagine it. Isn't that crazy? Jesus WHERE WERE THE ADULTS IN MY LIFE?! 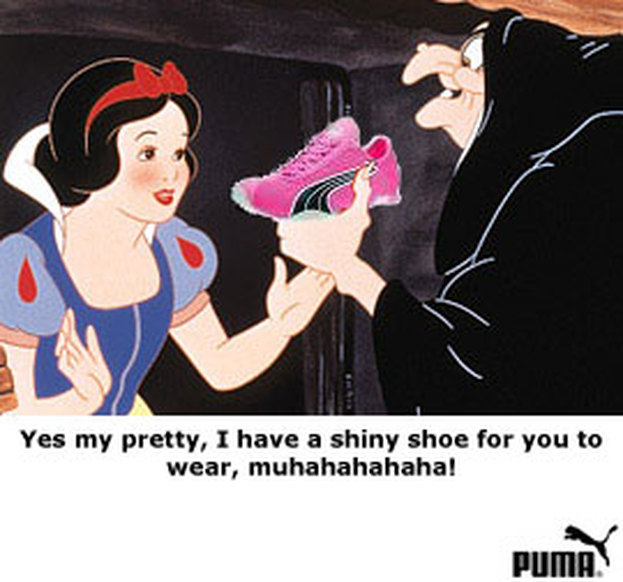 Today, they woulda called the cops and thrown me in the looney bin. Back then, people were less scarred so they just laughed at me. And honestly, making people laugh was the trick. If you can write something funny you've already got a foot in the door. Not many people can pull that off and it's one of those things you can't learn.​ 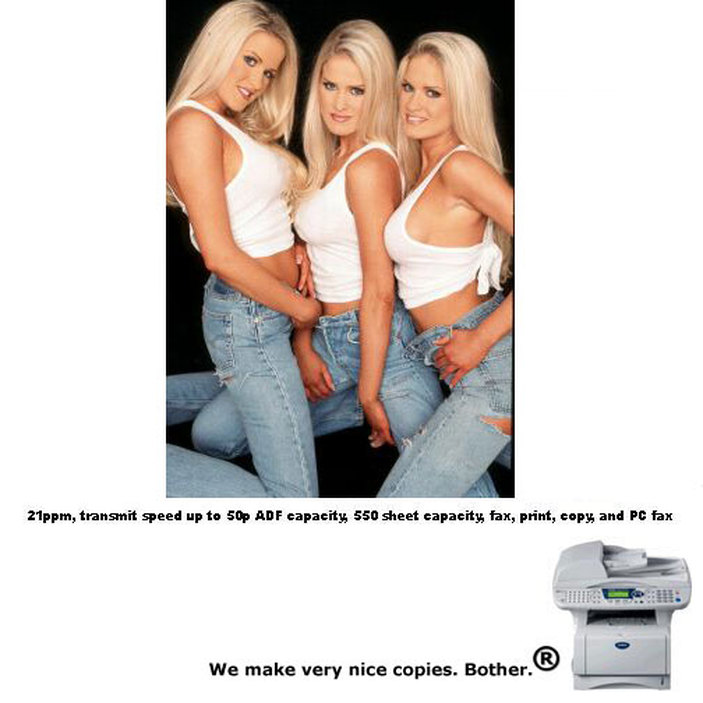 Eventually, I did get a client. A client turned into two clients and so on. 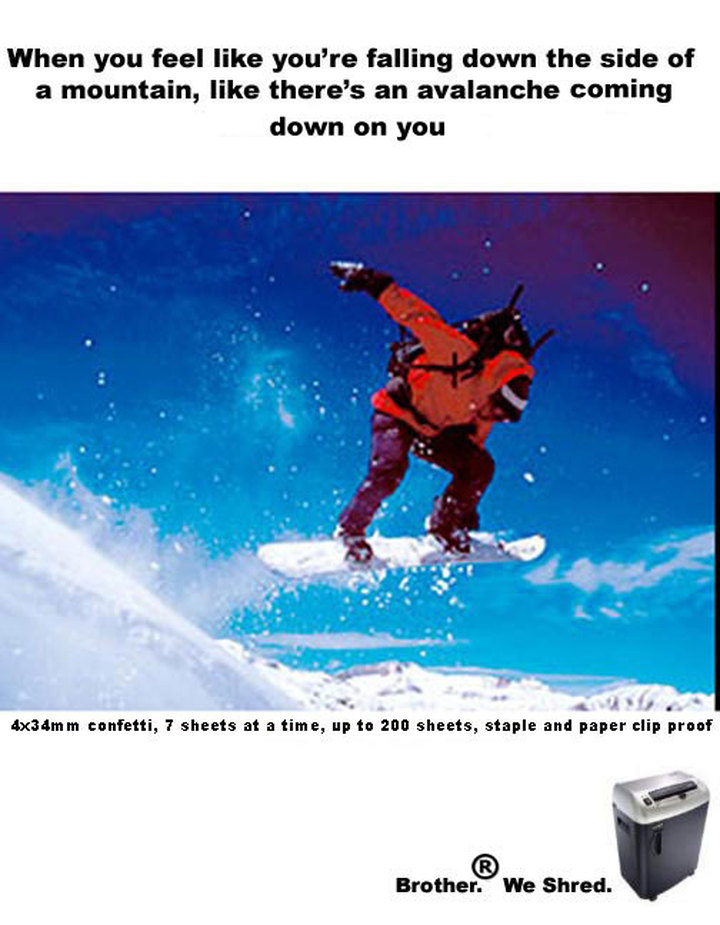 But I was SO poor. Lol, omg I was ALWAYS HUNGRY!

Like this ketchup? I couldn't afford this ketchup. I ate cans of tuna because that's good for 2 meals and they cost 89 cents each (I didn't opt for the fancy tuna people). 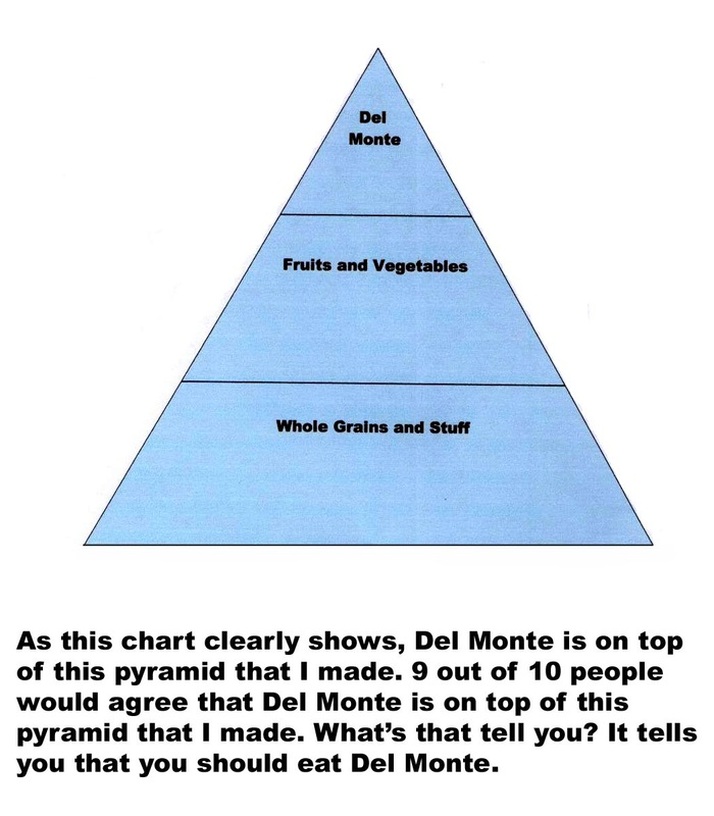 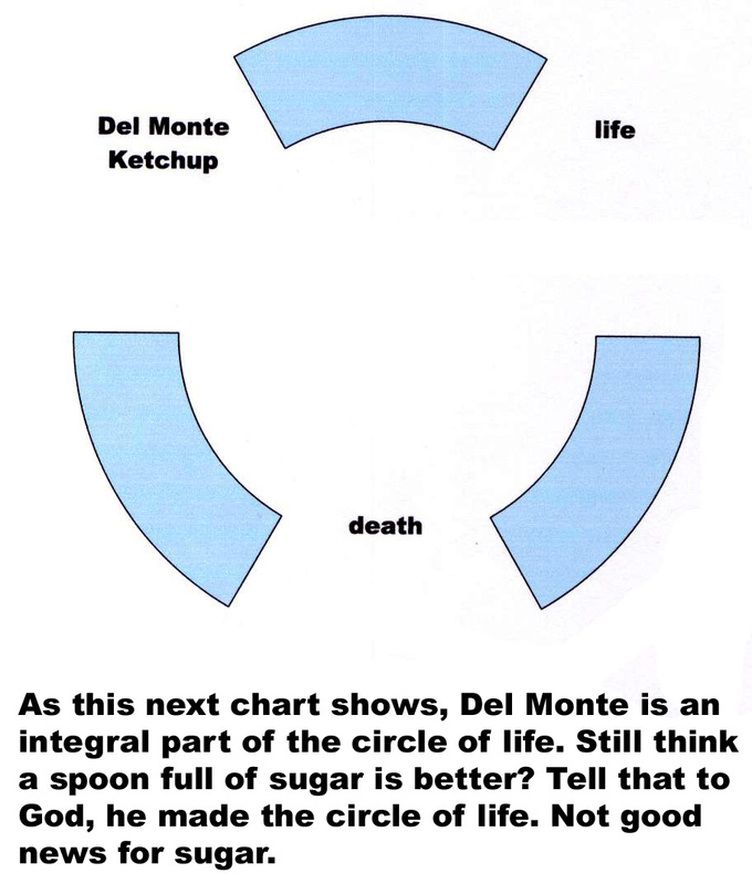 Anyway, that's how I did it. I'm sure it's easier now. At the very least you've got the internet so you can skip the part where you almost get arrested. I mean, they had internet back then but it was mostly this thing called dial-up so really, you might as well have not had internet back then. I'm also not one to be like "I had to climb up hill both ways to school! harumph harumph you have it too easy!"

Nah, I'm just saying this is how I did it and I really hope it's a LOT easier for you. I wouldn't wish that on anyone. But, that's basically the extent of my knowledge on how to do it.

Oh, there's this. You kinda need to be good at it. There are tons of things you can learn, but there's just as much you can't. Everyone thinks they can make ads. Seriously, deep down everyone believes that even while they're telling you to your face otherwise. We all have ego. Here's the thing, and experience has shown me this as well as every single time I turn on the television, look online, or turn on the radio.

The Difference
Between Advertising,
Marketing & Branding.

Advertising is trying to take the girl at the bar home with you.

Marketing is trying to get the number of EVERY girl at the bar.

Branding is showing the girl at the bar your junk.

I'll explain this at some point when I have the words to do it justice. It's a ridiculously accurate analogy for anyone who understands this business, but it's really hard to translate for anyone who doesn't.

Every Single Job
Is Exactly The Same
As Every Other Job

Doctor’s Office: You need to stop smoking and jog now and then.
Patient: True, but I saw this commercial for a pill and I think my insurance covers…

Mechanic: You need a transmission.
Driver: Absolutely, my neighbor said I'd be good with an oil change for a few months first so...

Advertiser: You need to make ads that get people's attention.
Business: Yes, so we’ve put together an internal focus group and they say, “more branded”...

No one listens to the professionals until it's too late.
​

I Don't Hate Branding
I Just Know for a Fact
It's Not Important
Also Though, Let Me Defend Branding

First, let's preface this by stating what branding actually is, and compare that to how "branding" is used today.

​Here's what branding is: Tone. Full stop. Sure a lot of things make for a tone, but the same things don't make for the same tone in any given situation and determining the difference is a creative endeavor best left to creative minds who've done this sort of thing before. So, just tone.

But here's how it's used: Fonts, colors, that ridiculous business-speak keyword a middle manager overheard at a C-Suite meeting and now you just HAVE to shove that goddamn word in everything even though it's a useless piece of not-really-even-english because if that word's not there how will anyone recognize your brand? How someone feels this second--that's now branding as well. Let's see. Branding is how you write dates on invites, it's where you place a name on a package, it's dimensions of a logo completely invisible to the human eye, it's what order you put things in, it's the amount of white space, it's whether you call it a special or a sale... I've made none of this up. In my over-a-decade career everything here at one time or another has been presented to me as "branding" and so much more nonsense like it.

It's basically a catch-all that allows people who are incapable of creating a successful ad or piece of marketing to establish a position of power within an agency or in-house advertising department.

Not inconsequentially I think branding as it's used today is also a huge waste of time and money. If I owned a company and had any clue the amount of man and woman hours wasted discussing, changing, overthinking and changing again things that don't make money, I'd be furious.

I would bet no less than 2 million dollars in billable hours has been spent worldwide discussing the difference between, say, Verdana and Arial, for "our demographic." I'd put money on that specific of a question. When the answer is simple, YOUR DEMOGRAPHIC CAN'T SEE THE DIFFERENCE UNLESS YOUR DEMOGRAPHIC IS DESIGNERS. They don't know. They don't care. Let the designer make that determination, that's why you pay them.

And all this sounds pretty negative I realize, and that's good because a lot of time and money is being wasted, good ads are being killed, and crappy ads are being financed and falling flat all under the flag of "branding."

Honestly, it's not even fair to branding so if anything maybe I like branding more than most people. I'm over here trying to defend branding, to keep it out of jail while all these brand police are busy stacking up the false charges.

Okay that was a crazy tangent.

​So to prove I don't hate branding here's how to brand the right way. At least while talking to a professional who isn't just making shit up as they go.

That's how to brand successfully.

All of this is not to say it's a bad thing to have set colors, fonts, etc that you use consistently. It doesn't mean your logo shouldn't be just so. All of that is true, you should do that. You shouldn't have people who don't know what they're doing police that though. Those things take 10 minutes not 10 meetings, and they're private affairs, they're not your main selling point. It's your junk. Keep it in your pants. See, I knew I'd explain the analogy eventually. Main thing:

Don't let branding be the reason an ad doesn't make money, or an excuse to waste money.

Yep. Weird thing is I don't even like money. I mean, money is better than any alternative the human species has come up with. It's better than trading chickens and clubbing people over the head for their loincloth. I'd love to have more money. I need it for buying stuff, you see.

But there's GOT to be a better way, right? We just haven't figured it out yet so we're stuck with money. (Btw, money is results. When we say results, we're really talking about money, for the kids not quite tuned into the corporate double speak yet. No one gives a shit about your likes if no one bought anything.)

I can't compete with a charismatic good looking person while speaking to a room full of executives about what direction the next campaign can go. Good looking guy or gal who can hold a room's attention, well played, you win this round.

But what I can do is make shit that works. And by consistently making shit that works for years, I've found, suddenly to my great surprise and delight, people start to listen to me instead of the good looking charismatic guy or gal. It's like sweet nerd revenge.

​Here's one of the biggest problems in advertising and marketing, and it's always been this way, it's nothing new.

​It's no one's fault. That's just how we've evolved as as species.

But you see the problem right? So yeah, I LOVE results. They're my favorite thing in the world. More than the awards, even more than how much fun it is just coming up with this stuff.

"Okay, I Get It
But Tell Me About
​Creativity"

That's just it you see. If someone needs to explain it, it didn't work.
Creative Las Vegas copywriter for video, radio, online, email and more. I come up with the ideas that win your business a lot of new customers. Contact me for freelance copywriter rates.