Las Vegas Copywriter
We won a Shorty Award for this one, that's an international viral video award. That was pretty cool. It was in the millions for views, plus interaction went up into the six figures, so it probably wasn't all bots.

I think the idea of using a regular employee as the main delivery device for a tableau of celebrity is what holds these together. My thinking was, that would give people a realistic anchor, so it's not just a random spectacle. The viewer might have a reason to participate in the suspended disbelief. That, and the line at the end making it about the viewer instead of about the hotel. All of that was thought out.
​
Below was a piece for an event held to raise money for Vegas sports, specifically the building of the Raider's stadium and that hunt to buy a team. I know it looks all blurry and weird now. Just hit play I think you'll like where it's going. It actually might be my personal favorite even though it never got a penny of budget or a second of air time outside of this private event.
The Luxor video above won a local videography award. The last 10 seconds turn into a Hanes commercial because, I don't know why, last minute client jitters I guess. It was supposed to be so, so sexy. You can see where it's going. But you know, Vegas? Sexy? That would just be weird. Despite that I was very happy with how it turned out and I think everyone else was as well.

The next couple of spots were for conventions and business meetings at MGM Grand.
Fairly basic concept that performed pretty well.
Social folk said The Pub one went viral. This came with all kinds of moving parts. Little definition cards, coasters, posters, some of that you'll see under the "print" tab. Coming up with these definitions was a lot of fun. I wish I still had the rest of them. There were a couple dozen.
The Beerhaus campaign also made the social folk pretty happy. So, that was good.
Fast. Simple. Effective. Honestly not sure why it's still on my site. I think I like the plate moving into the frame and the timing or something.
"Time" was a feel-good branding piece made about 3 months before that New Year. Had I written it closer to that specific New Year it would have been a different piece entirely. The tone no longer matched the times.

Below are some screenshots of some presentation decks. Though I'm an introvert (I've never met a good writer who wasn't), I do prefer to present my own concepts--and to be on standby when I've contributed to another team member's concept. This way has the best track record for getting a client to do the right thing, in my experience. 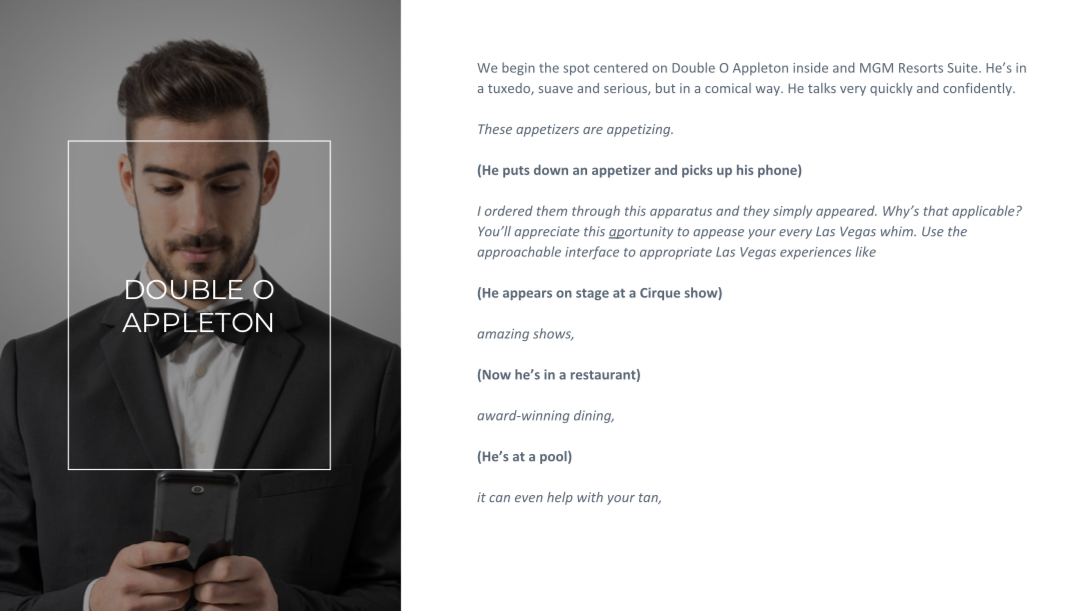 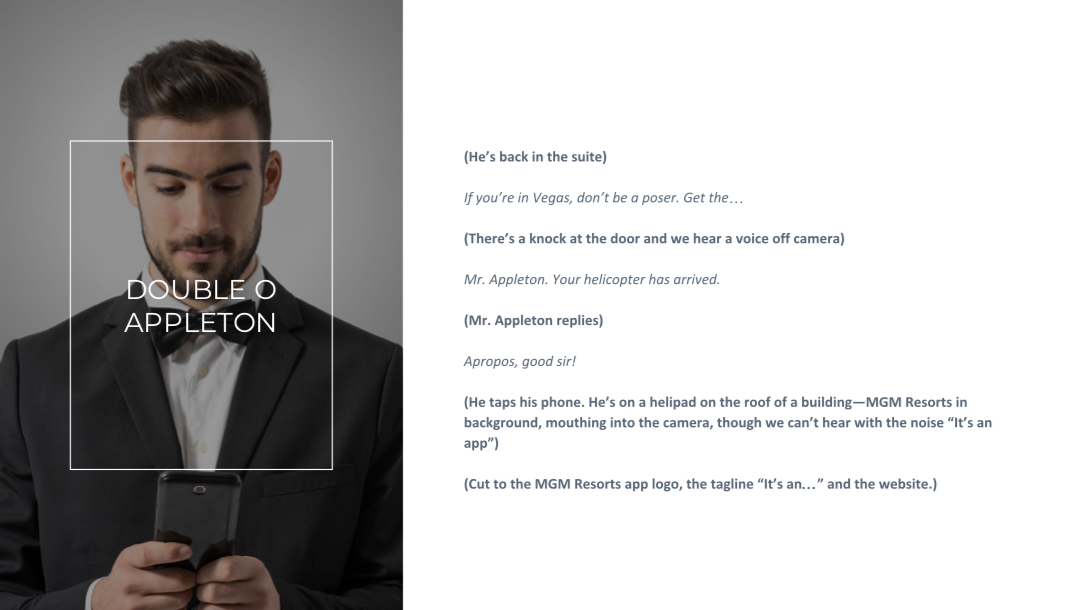 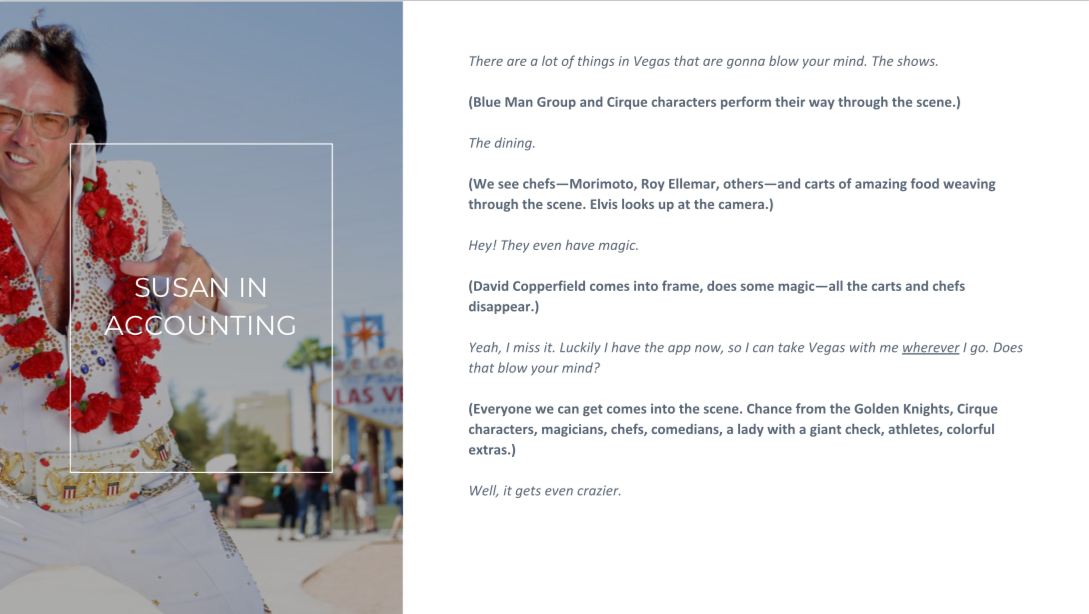 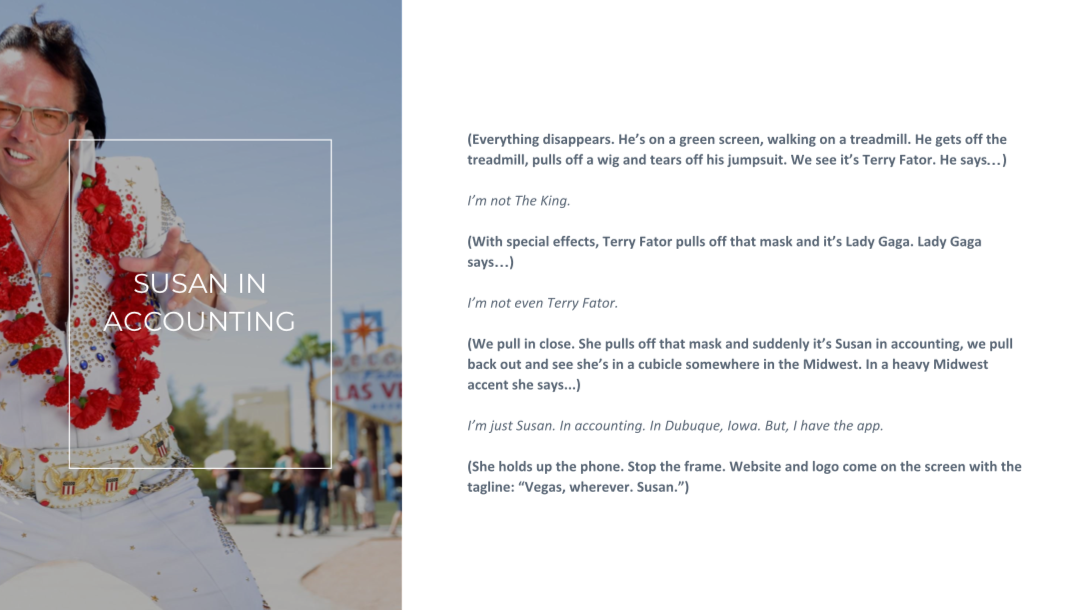 This is one of my favorites that I worked on. At the time I came up with this concept, through writing the scripts and presentation, I was not getting paid by my agency due to COVID. They were on the brink of closing their doors so I volunteered to try to help land this one client. That ended up not happening and I quit that agency when they tried to hire us back for a significant pay cut. For the longest time I had no clue what happened to this, but luckily the CD who put the deck together still had it, so, here it is. He's not with them either now which is why I feel kinda lucky I got a hold of it.

Download File
Creative Las Vegas copywriter for video, radio, online, email and more. I come up with the ideas that win your business a lot of new customers. Contact me for freelance copywriter rates.